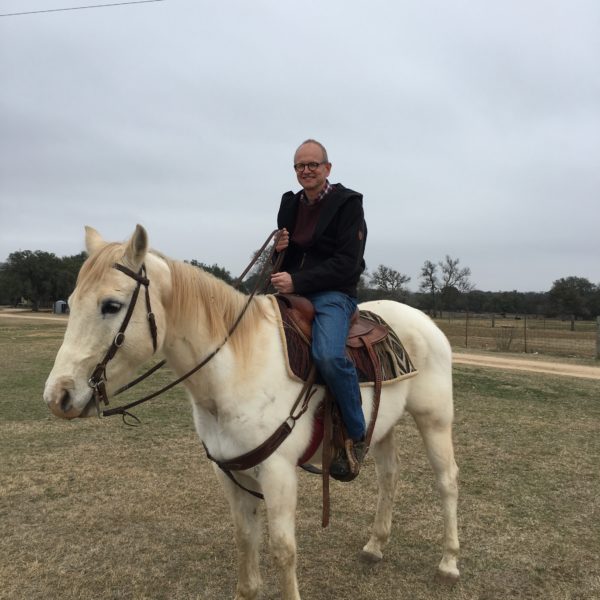 Hans Boersma was born in the Netherlands and currently teaches at Nashotah House in Wisconsin, where he holds the Saint Benedict Servants of Christ Chair in Ascetical Theology. He generally hates movies as “most of them warp our character - but I do think Babette’s Feast is pretty good.” Hans has a golden retriever called Penny (5 months old), a joint project he’s recently taken on with his youngest son and daughter. He doesn’t really have a favorite smell “though the smell of pot roast on an empty stomach is pretty powerful.” His first job was teaching 2nd grade and when not at work he likes to read and write theology and “Apart from walking and training Penny, I don’t really have other hobbies.”

I want to focus on your recent book “Seeing God”, which is a study of the so-called “beatific vision” in Christian theology. Could you just start by giving a brief explanation of the concept of the beatific vision for a layperson unfamiliar with the term?

The beatific vision is the vision of God that he promises will be ours in the hereafter.  The notion of seeing God has, through much of the Christian tradition, been treated as our final end—when we will see God “face to face,” as Saint Paul puts it (1 Cor. 13:12).

You emphasize that the beatific vision is to be understood Christologically (e.g. pp. 409-20), based on passages such as John 14:8-9 (“Whoever has seen me has seen the Father“). Can you explain that further?

It seems important to me that when God reveals himself in Christ, he truly reveals himself as he is. That’s Jesus’s point to Thomas and Philip in the chapter you mention. So, when John writes that “we shall see him as he is” (1 John 3:2), we should not think that there is some kind of essence behind God’s revelation in Christ, which we will see in the hereafter. Instead, I believe that in the hereafter God will show us his love in Christ himself—though in an even deeper and fuller way than in this life. Underlying this emphasis on Christ as the “contents” of the beatific vision is a discussion surrounding the theology of Thomas Aquinas. For Thomas, while we see God in Christ today, in the hereafter we will see the divine essence. On my understanding (and also that of the Eastern church and several Puritan theologians) such a distinction is problematic. We should focus on Christ, also when it comes to the beatific vision.

In the book you demonstrate how important the concept of the beatific vision has been in the history of Christianity. At the same time, you note that the concept has been neglected in modern times. Can you summarize some of the primary causes of that neglect? Why do you think it is theologically and practically important to recover a sense of its importance?

The reasons for the neglect are multiple, but I think we’ve experienced a broad shift in modernity from otherworldliness to this-worldliness. This modern focus on enjoying this-worldly things has also affected the church. For the earlier tradition, when people thought of the hereafter, they thought of God himself: our heart is restless until it finds its rest in God, according to Augustine. Instead, contemporary theologians have so emphasized the goodness of the created order that they have turned it into our final end. You see this, for example, in a focus on creation rather than on God in the eschaton. Earlier theologians had a deeper awareness than we do today of the discontinuity between this world (and its created goods) and our heavenly future (where God himself is the one and only one in whom we find our rest). Michael Allen’s recent book Grounded in Heaven offers a great antidote to this naturalism that affects parts of the evangelical and Reformed traditions.

There is a strong emphasis throughout the history of the church on the importance of hearing God speak in the preaching of His Word. But places in the book you argue for “a certain prioritizing of vision over speech” (p. 221; also pp. 4-5). Could you explain that further? Is there something inherently superior about the faculty of sight compared to the other senses? In reading that I wondered whether we should understand the Bible’s references to “seeing God” as a kind of shorthand for what will be a total sensory experience of the presence of God, involving not only sight but also speech/sound, taste (Ps 34:8), touch (John 20:27), etc.

Great question! Yes, I do think that all five senses will undergo a transfiguration in the eschaton, such that we will not only see, but also hear, feel, touch, and taste God in Christ—all this in a supra-sensible manner (as Gregory Palamas would put it), with our senses renewed or shaped in a way that we cannot even begin to comprehend today. Still, for most of the tradition, sight has served as the preeminent of the senses. This has to do with the fact that for Christian Platonists (that is to say, most Christians), vision unites the seer with the object of his vision. So, there’s an element of union that’s indicated through the language of vision that the other senses don’t quite convey in the same way. We should also remember that Scripture highlights seeing God more than the other senses, both in the Old and the New Testaments. But your question intuits rightly (1) that our entire body will be transfigured in the hereafter; and (2) that we cannot distinguish the five senses in the eschaton the way that we can distinguish them today.

In what sense has the reality of beatific vision come to shape you in your day to day life?

Like most people, I too have suffered the impact of the modern age, with its numerous distractions. But I’ve come to recognize that contemplation (of God) is more ultimate than action (which focuses on created goods). It’s not as though the former is positive and the latter negative—in this life, contemplation must always give way to action (and then again yield to contemplation). But in the hereafter, we eternally behold the face of God. One of the concrete results of this is that I’ve taken up the practice of lectio divina, an ancient contemplative mode of reading Scripture.

Special thanks to Max Rogland for the interview questions.

Why is The Laymens Lounge a Kuyper Boot-Licking Fan-Boy

And Why I Want Christians to Read Him

I thought “I should wipe this pee off. If I was in the garden, or the new heavens and new earth, there would be no pee on the toilet seat. I wasn’t created to pee on the seat nor were people created to have to sit on my pee.” And...
Read More

The State of Neo-Calvinism: Japan

In Japan, the earliest reference to Kuyper can be attributed to Takakura Tokutarō (1885-1934), a pastor and theologian of the Japan Christ Church. In a 1923 work, he drew attention to Kuyper’s Lectures on Calvinism as a proper analysis of the relation between Christianity and culture. Takakura most likely read...
Read More

Steve Garber: The Core Longings of the Human Heart

Experiencing God with Kuyper the Mystic or the Cerebral Kuyper?

Join us we sit down with Steven Garber and identify and discuss the core longings of the human heart – especially those of the Christian. We ask questions like “how can Christian’s experience God?” - “Is Abraham Kuyper’s mysticism unachievable?” - “What values is there in merely reading about God...
Read More

Steve Garber: The Core Longings of the Human Heart

Experiencing God with Kuyper the Mystic or the Cerebral Kuyper?

George Harinck: The State of Neo-Calvinisim in the Netherlands and Abroad

The Rise, Demise, and Global Resurgence of Abraham Kuyper

Myk Habets: The Joy of a Trinitarian Christmas

Naming the presence of God in our midst

Chad Bird: When the Old Testament Sprouts Wings & It All Starts to Make Sense

Gary Colledge: Who was Charles Dickens?

The Man, the Faith, & the Life Behind “A Christmas Carol”